National Assembly
of the Republic of Bulgaria
Members of parliament 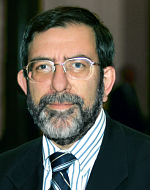 Philip Dimitrov graduated from the Law School at St. Kliment Ohridski University of Sofia in 1977 when he was 22 and worked as an Attorney at Law until 1990.

He joined from the beginning the democratic movement in Bulgaria and in 1990 was elected Vice-President of the Union of Democratic Forces, responsible for Foreign Relations.

In December 1990 he was elected President of the Union of Democratic Forces, which managed to unite practically all pro-democratic and pro-market oriented groups and newly formed parties in the country and remained leader of the Union until the end of 1994.

After the free elections of October 1991 he became Prime Minister of the Republic of Bulgaria thus being the first democratically elected Prime Minister of Bulgaria after the end of communism. During its term of office (until the end of 1992) his government started a rather ambitious set of democratic political and economic reforms. Under his administration observance of human rights became an irrevocable legal and ethical norm eliminating previous ethnic tensions and abuses. Foreign policy focused on reintegration into Europe and the West. Bulgaria was the first country to recognize Macedonia unconditionally as a sovereign state. The communist backlash (1992-1996) led to the premature fall of his government, but the Union of Democratic Forces maintained its line and eventually won the elections in 1997 and speeded up the reform process in Bulgaria.

Philip Dimitrov was Member of Parliament between 1991 and 1997 and Vice Chairman of the Joint Parliamentary Committee European Union - Bulgaria between 1995 and 1997.

In April 1997 he was appointed by the New UDF Government Ambassador of Bulgaria at the UN, New York and from

August 1998 to January 2002 was Ambassador of Bulgaria to the US at Washington D.C.

Since July 2005 he is again MP and Deputy Speaker of the Bulgarian National Assembly.

Since September 2002 he is teaching at the American University in Bulgaria, which is affiliated to the University of Maine

In 2003 he was Public Policy Scholar at Woodrow Wilson Center, Washington DC

In September 1999 Mr. Dimitrov was granted the Truman-Reagan Freedom Award for his contribution to overcoming Communism.

Philip Dimitrov is member of the Club de Madrid.

He is Honorary Chairman of the George Marshal Association, Bulgaria, Member of the Board of New Bulgarian University.

In the recent years he was involved in the Young People and Politics Program of the Bulgarian Institute for Legal Development, the Knowing about the Holocaust Program of Open Society Institute – Bulgaria and with a program for monitoring Anti-Semitism Trends in Bulgaria.
He has published numerous articles on politics (1991-2003), several articles on psychotherapy (1979-1984), two political books<i> (the Myths of Bulgarian Transition and The New Democracies and the Transatlantic link)</i> and three novels <i>(For the Lived O, Lord, 1991, The True Story of the Round Table Knights, 1997 and Light of Men, 2003)</i>
Speaks English fluently and Russian and French on a working level.
He is married, his wife Elena is a medical doctor.