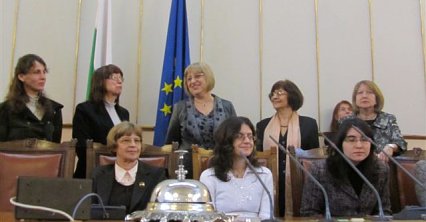 The meeting with the researchers from CERN took place on March 8th 2011. The speaker of parliament Tsetska Tsacheva noted that the work of these women merits the respect of all state institutions. "The fact that one third of all scientists at CERN are women proves  there are no male and female professions." She added that the fight against poverty could be successful by using modern technologies and innovations, a field in which CERN has a leading role.
The President of the National Assembly summarized the opinion of the participants at the meeting that the Europeans and our European philosophy drawing its origins from Ancient Greece and Rome with our Western system of values, science, way of thinking and spirit is competitive with the Eastern philosophy. In her words the ladies scientists working in this extremely complicated field are as good as men. She added that these women have the ambition to not let the scientific achievements remain closed in the CERN labs but to introduce it in everyday life with the help of business. According to her the future development of mankind is linked to the innovative technologies. Tsetska Tsacheva emphasized that more and more young university female students and graduates take on the difficult path to make a carrier in this very serious science requiring a full self dedication.
The speaker of parliament wished the participants good health and many more occasions to experience pride in the achievements of Bulgarian physicists and engineers. She said that the join work between CERN and Bulgarian scientific institutes and universities could stop the brain drain, and the losses of the state which invests in these young people but is not able to provide for their realization in Bulgaria. She described CERN as  good example of a place where one can travel, exchange experience and information with other scientists and experts while working at the same time for a scientific institute of the Bulgarian Academy of Sciences, a place where it does not matter whether one is man or woman, the only thing that matters is Physics. She underscored the presence of Bulgarian women in Science and recalled the name of Prof. Elisaveta Karamihailova – the first woman to teach at “St. Kliment Ohridski”  University in Sofia and the founder of  its Nuclear Physics Chair and the Lab on Radioactivity at the Institute of Physics of the Bulgarian Academy of Sciences.
As part of the events related to March 8th, Tsetska Tsacheva conferred with Italian journalist Elisabeth Durante. The latter gave the idea to set a photo exhibition dedicated to the Bulgarian and Italian women researchers at CERN. Mrs. Tsacheva is to open the exhibition at the University “St. Kliment Ohridski” tonight. The exhibition is organized by the Gender Project for Bulgaria Foundation, Lions Club “Sofia – Sredets”, the Women Entrepreneurs Association of Bulgaria “Selena” in partnership with the Cultural center of the university and the Ministry of Labor and Social Policy.