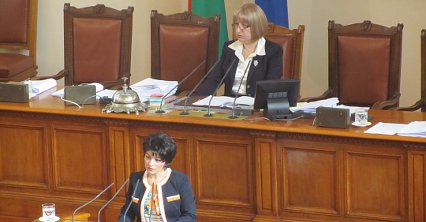 The dismissal of Stefan Konstantinov and the election of Desislava Atanasova was passed with the votes of 120 deputies, 46 MPs were against. There were no abstentions.  The Blue Coalition parliamentary group abstained from voting. The three opposition groups of Coalition for Bulgaria, Movement for Rights and Freedoms and Ataka voted against. From the 19 independent deputies one voted “yes”, one “against”. The resignation of the former economy, energy and tourism minister Traycho Traykov and the new appointee Delyan Dobrev were supported by 119 deputies, 42 voted “against”, without abstentions. The parliamentary groups of the Blue Coalition and the Ataka party did not participate in the vote. The decision was supported by the GERB PG  and 19 independent deputies. The Coalition for Bulgaria and Movement for Rights and Freedoms parliamentary groups and one independent Member of Parliament voted “against”. The personnel changes of the cabinet were presented by the Vice-Premier Simeon Djankov.