National Assembly
of the Republic of Bulgaria
News
National Assembly President Mihail Mikov takes part in the national commemoration of Alexander Stamboliyski, marking the anniversary of his tragic death 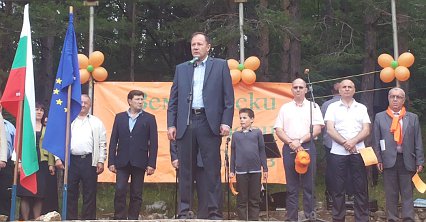 National Assembly President Mihail Mikov took part in the commemorative gathering on the occasion of the 90th anniversary of the assassination of Alexander Stamboliyski in the Yanini Gramadi vicinity, just above the village of Slavovitsa, Municipality of Septemvri.

90 years cannot shroud in oblivion the deed and heroism of the agricultural tribune, said in his speech Mihail Mikov. He pointed out that under the rule of Stamboliyski Bulgaria was free. According to the Speaker of Parliament, many of  Stamboliyski’s ideas remain relevant even today.

We, the politicians, must pay particular attention to the protection of small and medium-sized producers, just as Stamboliyski did in his platform, Mihail Mikov said. He went on to stress that the idea for ​​universal education of children, for affordable and free education guaranteed by the state remains valid to this day. Today, bowing heads before the banner and heroism of the agricultural tribune, we should take responsibility for the future generations and nationally significant ideas, said the President of the National Assembly.

Greetings to the multitude of people were sent from the rostrum by  the leader of "Alexander Stamboliyski" Agrarian Union, Spas Panchev, and the Chairman of the Agrarian People's Union, Rumen Yonchev.

A statement was read on behalf of the above organizations and "Nikola Petkov" PP, addressed  to the President of the 42nd National Assembly. The said formations declared their strong mind  to undertake a "Course of unification" and work together in the interests of farmers. The document also calls for the development of a national strategy for Bulgarian agriculture and rural development, preferential lending to small and medium agricultural producers and for encouraging small and medium sized businesses.

Later on a wreath and flower-laying ceremony took place at the ossuary of Alexander Stamboliyski with a solemn "Change of Guard" ritual. A memorial service was served.