National Assembly
of the Republic of Bulgaria
News
During visit to Bucharest, National Assembly President, Mihail Mikov, agrees new forms of cooperation on issues of priority importance between Bulgaria and Romania 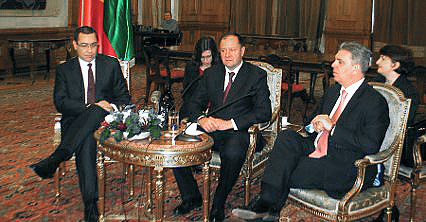 The President of the National Assembly, Mihail Mikov, and the President of the Chamber of Deputies of Romania’s parliament, Valeriu Zgonea, have agreed to coordinate their positions and efforts on important for the two countries issues before  the European Union. Romanian Prime Minister Viktor Ponta took part in the talks. The two parties expressed will to work on new, pragmatic and effective forms of cooperation between the two countries.

Mihail Mikov, Valeriu Zgonea and Viktor Ponta outlined specific initiatives for cooperation on governmental and parliamentary level. The implementation of the initiatives will create conditions for economic prosperity of the citizens, will improve confidence in the European partners and will generate stability and development in the region. The two parties agreed among the top common priorities were the joint projects of the EU Strategy for the Danube Region, the contacts between the business and the municipalities of the two neighbors, the new opportunities for trans-border collaboration, the Black Sea economic cooperation and the partnership in South East Europe.

They agreed Bulgaria and Romania need to coordinate their actions in respect to the important themes for the two countries – namely the accession to the Schengen area and achievement of the goals set by the Mechanism for Cooperation and Assessment. Viktor Ponta declared these issues need a new approach, as further postponement of the accession was humiliating. He stated both countries had achieved the technical requirements and were technically ready. According to Viktor Ponta the standards of the Mechanism for Cooperation and Assessment should be applied towards all member countries of the EU. The chair of Bulgaria’s parliament said: “ we need to ask for a more fair assessment of our countries and we have one more right to do so as we are guardians of an external border of the EU, which currently is under the pressure of a wave of migrants”. Mihail Mikov has noted a Center for Police Cooperation, operated by Bulgaria, Serbia and Romania, was to be launched, with headquarters in the town of Vidin (Bulgaria), a step that would be lauded by Brussels as a step aimed at the security not only of the 3 countries, but at the security of Europe as a whole.

The two leaders agreed to set a permanent mechanism of interaction between the two parliaments at committees’ level especially on the two important issues - the Schengen accession and the Mechanism for Cooperation and Assessment.

The two parties discussed how to enhance the trade and economic relations between Bulgaria and Romania and how to create better opportunities to attract more EU funds and investments. They discussed the need to attract EU capital for consolidation of the river Danube’s coasts along the two countries, which lose 5-10 meters annually due to erosion.

The Bulgarian delegation has met also with the Head of Romania’s Senate, Krin Antonesku, with Foreign Minister Titus Korlacian, and with members of the parliamentary committee in charge of the country’s accession to Schengen.