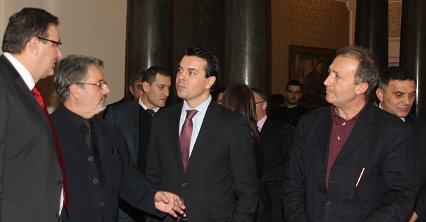 Bulgaria and Macedonia are to work actively on the realization of joint infrastructure projects and on deepening their friendly relations. The statement has been made by lawmakers of the parliamentary friendship group Bulgaria – Macedonia at the official meeting with the Minister of Foreign Affairs of the Republic of Macedonia, Mr Nikola Poposki.

The head of the Bulgaria - Macedonia friendship group in the parliament, Emil Kostadinov, noticed that the two countries had common path of development - the European. He further said the politicians have the task to perfect the democratic institutions in order for Bulgaria and Macedonia to reach the goals they have failed on in the last years.

In respect to the joint infrastructure projects between the two countries, the Republic of Macedonia’s Foreign Minister, Nikola Poposki, stated the two countries should put more efforts in the next several years to complete the direct high and rail ways between Sofia and Skopie. He added that the improved infrastructure will lead to easier communications and less expenditures.

Member of Parliament, Petar Mutafchiev has declared that in the face of Bulgaria, the Republic of Macedonia was having a strong supporter for its integration in the European Union. He added the two countries could reach great success if  relations based on good will prevail. Mutafchiev further noticed that the dialogue between Bulgaria, Macedonia, Albania and Italy should intensify, as well as the support on the part of the EU in order for the Pan- European transport Corridor No 8 to be realized.