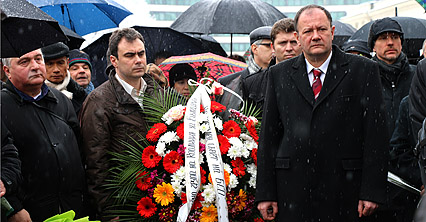 The President of the 42nd National Assembly Mihail Mikov and members of the parliament have marked the Day of the Holocaust victims and gratitude about the rescue of Bulgaria’s Jews during World War Two. The ceremony was held in front of the special memorial plaque, dedicated to this event and located behind the National Assembly’s main building. The Vice-Premier of Bulgaria and Interior Minister, Tsvetlin Yovchev,  the Mayor of Sofia city, Yordanka Fandakova, diplomats, representatives of non- governmental organizations, public figures and students from the school “Dimcho Debelianov” in Sofia took part  in the commemoration.

“Today we feel proud to be the heirs and descendants of a people who had found the strength, under the menace for their own future, to counter and say “no” to the hatred towards the people who were different, to hinder the ruling at that moment political and ideological standpoint", noted in his address the chair of the National Assembly, Mihail Mikov. He reminisced about the courage of Dimitar Peshev and the other 43 members of parliament who scattered the deportation of Bulgarian Jews to the concentration camps during the Second World War. Each one of us should find the strength to not only always resist the threats to freedom and democracy but to also defend the basic values left to us in the golden pages of our history.

The President of the Organization of the Jews in Bulgaria “Shalom” , Maksim Benvenisti, pointed out that  the nobleness and the sagacity of the Bulgarian deputies and public figures, at that time, who had the courage to fight for the salvation of Bulgarian Jews, had not allowed the good name of  the tolerant Bulgarian people to be forever tarnished.  He also stressed the active participation in the rescuing efforts of the Bulgarian Orthodox Church, which had mobilized a big part of Bulgarians to support the cause of saving Bulgaria’s Jews.

After the ceremony flowers were served on behalf of Bulgaria’s President Rosen Plevneliev, by Parliament’s speaker, Mihail Mikov, by Vice Premier and Interior Minister Tsvetlin Yovchev, by Zinaida Zlatanova – Vice Premier and Head of the National Council for Cooperation on Ethnic and Integration Issues, on behalf of the Coalition for Bulgaria’s parliamentary group, by the Mayor of Sofia city Yordanka Fandakova, on behalf of the embassies of the State of Israel, Great Britain, Germany, United States of America, Turkey and Hungary. The organization of the Jews in Bulgaria “Shalom”, the Jewish Organization “Sohnut”, the Club of Jewish Women -Veterans of WWII, the Zionist Federation of Bulgaria, the House of Moscow in Sofia, the Bulgarian Union of Antifascists, the University of Library Studies and Information Technologies; students from the Sofia high school “Dimcho Debelyanov”, where Hebrew and English languages are taught have also laid flowers.