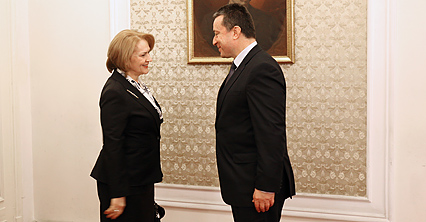 The chairman of the Foreign Policy Committee in the 42nd National Assembly, Yanaki Stoilov, and members of the committee have met a delegation from the Foreign Affairs Committee of the Republic of Albania. The delegation is led by the chair of the committee Mrs Arta Dade. The visit takes place at the invitation of Mr Yanaki Stoilov. At the meeting the relations between Bulgaria and Albania were assessed as excellent, that could help deepening the partnership in the regional development.

Yanaki Stoilov noted that the Presidency of Bulgaria of the Organization for Black Sea Cooperation during the first half of 2014, together with the one of Greece of the European Union provide good opportunities for development of the bilateral relations. He added in the last years the trade turnover with Albania has been growing, pointing to the existing extra potential for development in the fields of energy, machine building, food industry, tourism and the financial sector.

The MPs from Bulgaria stressed as essential priority the full development of the energy projects passing along the Pan-European corridor N0 8. The parties also discussed possibilities for direct electric power export from Bulgaria to Albania.

Arta Dade has thanked Bulgaria for the active support extended to the initiatives to which Albania is part and confirmed the need of more effective cooperation in the fields of agriculture, trade and energy.

Yanaki Stoilov noted the present goal of the Bulgarian economy was to raise production and productivity and rebuild industries.

The chairwoman of the Foreign Affairs committee in the parliament of Albania, Arta Dade, confirmed her country is to extend its support to Bulgaria for host of the Permanent Secretariat of the Parliamentary Dimension for Cooperation in South East Europe. The latter, Yanaki Stoilov added, will promote direct contacts between the two countries in the European Parliament. Yanaki Stoilov also said Bulgaria will stand by its support to the Republic of Albania’accession to the EU and is ready to share its experience accumulated in the pre-accession negotiation process.

Later the delegation of the parliamentary Foreign Affairs committee of the Republic of Albania, led by the chairwoman Arta Dade, met with leaders of the Defense Committee.