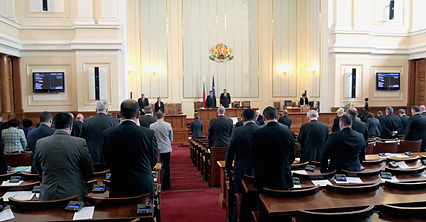 Prior to that, the Interior minister, Tsvetlin Yovchev, has presented information on the tragic incident.

He assured that in carrying out the operation, the Special Unit for Operations Against Terrorists (SUOAT) had strictly followed and applied all legal requirements and procedures. He explained the principal of the high school “Maxim Raykovich” has signaled on 12 March 2014 the police authorities that the offender Petko Petkov had threatened students from the school to use arms against them if they continue to make noise. The same day a pretrial investigation had been launched, followed by discussion of the case in the Supreme Prosecutor's Office of Cassation where a decision had been taken to carry out the operation in view of the high level of danger for the school students. The same day a plan for the police operation was drawn and an order for its implementation issued by the secretary general of the interior ministry and the head of the SUOAT. The police forces have been instructed twice in the presence of psychologists from the Internal Ministry’s Institute of Psychology. The operation was launched at 6 in the morning. The police officers had asked Petkov to surrender, to which he responded by shooting and wounding two of them. The police responded by retreating and once again asked the offender to surrender and to stop shooting. At first he stated he would stop but then started shooting again. One policeman of the antiterrorist unit was killed and another injured as a result of the second firing.  Minister Yovchev explained the perpetrator has been known to the police with his asocial behavior since 2011. He was asked to give up voluntarily the firearms that he owned lawfully. When his permit expired in 2012 a police operation with the participation of the SUOAT was under way to withhold the arms of the perpetrator by entering into his home, but later the operation was cancelled. According to the profile of Petkov, prepared by the criminal psychologists of the Institute of Psychology of the Ministry of the Interior, he has had a disruptive social functioning with hostile attitudes, he was unstable and had displayed aggressive behavior that could be directed against law enforcement employees as well as against random civilians. Minister Yovchev has reported that Petkov has been arrested, that he is alive and the police operation is over.