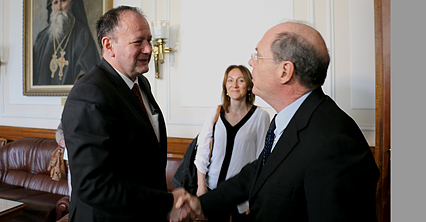 The National Assembly President, Mihail Mikov and the Vice-President of the European Broadcasting Union, Claudio Capon, shared the opinion that public media play extremely important role because they offer and shape the values of society. Claudio Capon is in Bulgaria in connection with the event titled:"School for Radio" organized by the Bulgarian National Radio (BNR).

Mihail Mikov has noted that despite the difficult times and challenges faced by BNT (Bulgarian National Television) and BNR they are important for the free speech in Bulgaria. They experience many difficulties and hardships and are very often subjected to critiques by the society.

National public media today have a very difficult task, stated Claudio Capon." I was Director General of the Italian TV Channel RAI for two terms and I could say that their role is even greater in difficult times and their main goal is to preserve the quality of the provided information", he added.

Mihail Mikov and Claudio Capon discussed also the legislation related to public media. The legislative framework in which they operate is the first step for their independence, pointed the vice-president of the European Broadcasting Union. He added his organization was very active in formulating legislation in the field of public media, as the latter has many experts ready to help every state in Europe.

Together with our partners in Europe we are very active in defining our key values, said further Claudio Capon. He offered to the chair of the Bulgarian parliament the Declaration, signed by all members of the EBU, on the public media work directions.

The head of the parliament and his guest agreed that the institutions of the Public Radio and Television are set to undergo a difficult process of restructuring and technological modernization owing to their public functions. They need funds in order to be able to carry out their mission - something topical for all states in the European Union, said Claudio Capon.

The Speaker of the National Assembly noticed that in time of crisis, when public finances shrink in all areas, allocating of additional funds becomes very difficult. He added the parliament is aware of the problem and is committed to find a solution.