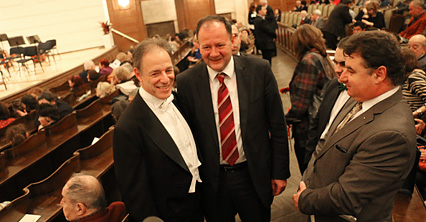 Eminent musician Ricardo Averbach was guest conductor of the third concert of music events cycle dedicated to the 135th anniversary of the modern Bulgarian state. In the overcrowded "St. Sofia" Hall of the National Assembly, Simfonieta "Sofia" orchestra under the baton of Svilen Simeonov performed "Film Music" by Copland, "Tangatso" by Piazzolla, "Love Magic" by Manuel de Falla, Piazzolla's and Argentine tangos. The musical event was attended by the Speaker of Parliament Mihail Mikov and representatives of the diplomatic corps.

Before the concert maestro Averbach noted for the media that the program starts with an American piece, that will be a premiere in Bulgaria – “Film Music” by Aaron Copland, one of the most famous composers in the United States. I have played many times Bulgarian music in the U.S. and I always try to put on the program Bulgarian pieces, said Ricardo Averbach. He works in the U.S. but was born in Brazil and his family has Bulgarian roots. He is currently Director of the Department of Orchestral Conducting at the University of Miami and President of the Union of the U.S. University Conductors.

Maestro Averbach noted that he was strongly impressed by Simfonieta "Sofia" orchestra and that at the very first rehearsal everything went very well and the music was performed very emotionally. This music is a dance and one cannot play it without passion, he added.

I am happy when I come to Bulgaria and meet with friends and acquaintances, said Ricardo Averbach and noted that he had graduated choral conducting under Prof. Vasil Arnaudov and orchestral conducting under Prof. Vladi Simeonov. My mother comes from Sofia, she has always loved classical music and it was under her influence that I started to study classical music, while my father is Brazilian and loves the carnival, so both roots have mixed up, he added.

The conductor of Simfonieta "Sofia" orchestra, Svilen Simeonov, thanked the National Assembly for having responded to the idea to revive the concert life in "St. Sofia" Hall. He announced that the next appearance will be at a concert on the occasion of Palm Sunday - April 11, with French, Spanish and Bulgarian composers on the program.

Another emphasis of this year's program is the traditional concert that will celebrate the Day of Europe - May 9, and will honor the memory of those who perished in the
World War II. Concertos for violin and orchestra by Ludwig van Beethoven will be performed at the concert.

The third concert of Simfonieta "Sofia" orchestra was organized with the support of the Ambassador of Argentina, H.E. Guillermo Asrak. The musical events are part of the "Open Parliament" initiative held under the patronage of the President of the National Assembly Mihail Mikov and carried out in cooperation with Sofia Municipality.