National Assembly
of the Republic of Bulgaria
News
Countries, part of the Process for Cooperation in Southeast Europe (PCSEE) establish their Parliamentary Assembly in Bucharest 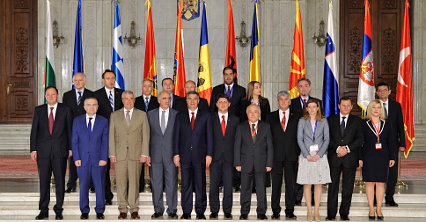 The heads of parliaments of the 12 countries participants in the Process for Cooperation in Southeast Europe (PCSEE) have gathered today to launch the Parliamentary Assembly of PCSEE. The inauguration happened with a gathering of a constituent assembly and was held in the capital of Romania, Bucharest on May 10th, 2014. Bulgaria was represented by the president of the National Assembly, Mihail Mikov, and the deputies Filip Popov, Rumen Getchev and Durhan Mustafa.

In his address before the countries’ representatives the president of the National Assembly, Mihail Mikov, declared that the newly founded formation, founded  to carry out the cooperation  between the parliaments is implementing an idea of Bulgaria dating back to 1996, an idea supported consistently by the country’s parliament in all these years. He defined the new body as being a strong expression of the political will to legitimize the efforts of the governments and the civil sector in the region of Southeast Europe.  These efforts in his view aim at improving the communication between the member countries, at the synchronization of the national approaches, at the following of commonly agreed criteria for democratization, aim at raising the wellbeing of people and at the process of associating the states in the region with those of the European family.

The participants in the conference have adopted rules of procedure for the work and have agreed on the structure of the Parliamentary Assembly. The adopted structure envisages establishment of three main committees – in charge of economy, infrastructure and energy, as well as such dealing in particular with the cooperation in the fields of justice, internal affairs, security, social development, education, science and research.

In the framework of the forum the head of parliament held meetings with his colleagues from Greece, Albania and Turkey.