National Assembly
of the Republic of Bulgaria
News
Mihail Mikov: The art of Boris Hristov is something Bulgaria is proud of 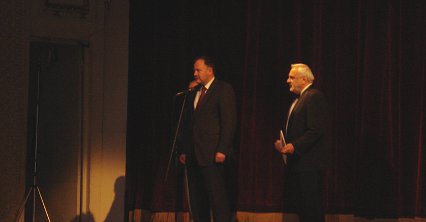 The creative life of Boris Hristov is a pride for Bulgaria. These are words of the welcoming address of the National Assembly President Mihail Mikov at the gala concert titled “The dreamed coming back on the stage of the Sofia Opera Theater” dedicated to the 100th birthday of the legendary opera singer. The musical event is part of the series planned for the commemoration of the centenary, to be held under the honorary patronage of the head of parliament. In the words of Mihail Mikov the greatness of the exceptional bass of Hristov is hidden in the unbelievable combination between the Italian music and his Slavic artistic spirit. To start with the “Gusla” choir, to continue with the choir of the Cathedral Church “St Alexander Nevski” in Sofia and to reach the stages of the biggest opera theaters like “La Scala” in Milan and “Covent Garden” in London, to bring pleasure to millions around the world, is something to be remembered for ever, stressed the president of the National Assembly.

The director of the Sofia Opera and Ballet Theater, Acad. Plamen Kartalov, noticed that Boris Hristov leaves behind his signature as fastidious and unsurpassed interpreter with a wonderful articulation, who devotes his thought to every single word and phrase while singing on the stage. On God’s will the angel’s voice of Boris Hristov has infused itself in the infinite horizons of the opera art and has left a priceless heritage, Kartalov added. He underscored that one of Boris Hristov’s biggest dreams had been to create an academy for young Bulgarian opera singers.

Honorary guest at the event was one of the biggest opera voices in the world, the baritone, Mr Renato Busoni. The genius Boris Hristov himself has taken part in the gala concert through the video materials of the BNT archive, showing the signature opera roles of his career.

The events planned for the celebrations envisage the open air performances of the opera “Boris Godunov”  which are to take place at Alexander Nevski Square in Sofia on 27, 28 and 29 June 2014, as well of Wagner’s “ The ring of the Nibelung” at the stage of the Sofia Opera Theater on 23,24, 26 and 29 July 2014. The National Assembly is to host an exhibition, dedicated to the life and creative art of the Bulgarian singer. The marking of the centenary of Boris Hristov’s birth is also part of the initiatives to popularize the candidatures of the city of Sofia and the Southwest region of Bulgaria in the competition for the 2019 European capital of culture.