National Assembly
of the Republic of Bulgaria
News
Mihail Mikov: During its first year the parliament has functioned efficiently, despite the difficulties, I thank the lawmakers 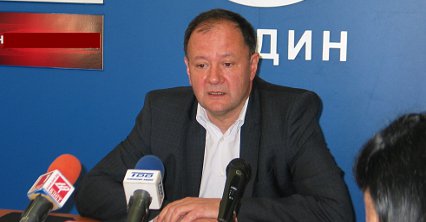 During its first year the 42nd National Assembly has functioned efficiently and has fulfilled the most part of the tasks for which the people had elected it in 2013. It has accomplished that despite the constant attacks against the parliament and the parliamentary rules. This is how the president of the 42nd National Assembly has assessed the first year of the latter’s work.

According to him the work and the interrelations between the political forces in the 42nd National Assembly reflect the election results, forcing it to work under conditions of pressure, protests and boycott.

“Nevertheless, I consider that the 42nd National Assembly is carrying out its constitutional powers. I do avail myself of the opportunity to thank all lawmakers, including those of the opposition, the ones who took part in the work of the 42nd NA during its first year, and who have contributed to passing the necessary legislation”, declared in addition Mihail Mikov.

According to the information he has presented, during the first year of the 42nd NA were held 118 regular and 18 extraordinary sittings.
The laws passed number 105, including the ratification laws. He reported that during the Third Session the number of completely new bills had increased and pointed to the new Audit Office Law and the Law on the Ministry of Internal Affairs.

According to Mihail Mikov the political assessment of the legislation adopted so far is that it was directed at alleviating poverty and at limiting the abuse of the monopolies. In his words a lot has been achieved in the area of energy legislature aimed at containing and lowering the prices of the latter. As far as the social sphere a lot has been achieved with regard to the poorest segment of the population.

The 42nd legislature has been very active in exercising its power of parliamentary oversight. The time used for control of the cabinet members amounts to: during the first session – 18.20 hours, during the second 48, 27 hours, in the third 44.55 hours. Mihail Mikov explained the increase in the time for parliamentary control with the fact that since the autumn session the parliament had introduced the so called blitz control with respect to the ministers and the prime minister.

The topical questions number: during the first session – 40, during the second – 99 and during the third – 77.

The president of the National Assembly admitted that the time to exercise more effective control over the independent regulatory bodies and to discuss their reports had not sufficed.

“I have to dispel the opinion that the lack of quorum has led to not passing certain laws. It has been compensated with the holding of extraordinary sittings and working extra time with the view to pass the necessary and important laws for the country”, Mihail Mikov added.

He determined as a pressing task, one that should not be postponed, the need to increase the protection of consumers.

The head of the parliament explained that he had convened an extraordinary sitting of the NA in order to consider the motion of no-confidence against the cabinet, submitted by the PP GERB PG at the very end of the pre-election campaign, so as that all lawmakers engaged with the campaign could take part in the discussion. In his view the motion has a different goal, not to seek responsibility on the formally announced topic. “One big question arises here – how the parliamentary mechanisms are used for attaining non parliamentary goals – having namely  political, pre-election objectives”, stressed the speaker of the NA.

Mihail Mikov was firm that in case of insufficient quorum of the sitting on Friday he is not to convene another extraordinary sitting and the consideration of the motion will be held next week.