National Assembly
of the Republic of Bulgaria
News
Legal Affairs Committee Chairman Chetin Kazak: Penal Code Draft is good foundation to work on the adoption of completely new Penal Code Act in the near future 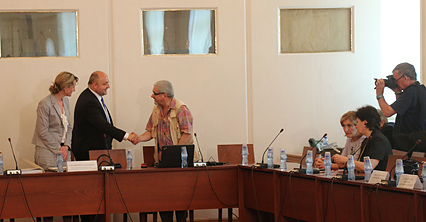 The parliament’s Legal Affairs Committee Chairman Chetin Kazak made the statement during the public discussion held with professionals of the legal community and academic circles on 24 June 2014. The debate on the Draft for new Penal Code, put forward on 31 January 2014 by the Council of Ministers, was organized by the Legal Affairs committee and the Ministry of Justice.

The chair of the committee Chetin Kazak noted this was the first bill proposing completely new penal code tabled at the National Assembly in the last 20 years. He underscored that representatives of 42 NGOs had expressed opinions on the draft in March 2013, when the first debate on the document was held and expressed hope the discussion with professionals would be useful and interesting.

He thanked all experts who took part in drawing up the new Penal Code and underscored that all opinions would be considered in the future work on the bill.

Vice- Premier and Justice Minister Zinaida Zlatanova noted that the work on the new Penal Code draft has started 5 years ago and stressed the legislative authorities should continue to support the efforts for reform in the judicial system. In her words reforms are started easily but carrying them to an end is difficult.

The experts who took part in the debate expressed different and opposing points of view, some in favor of adopting a completely new penal code, other defending the idea that amendments only would do.