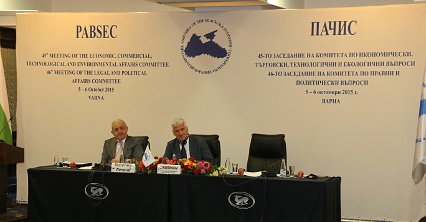 The meeting of the Commission on Economic, Trade, Technological and Ecological Affairs was open with the report of the deputy chairman of the Bulgarian delegation to PABSEC, Pavel Hristov, concerning the introduction of e-governments in the countries of the Black Sea Economic Cooperation (BSEC). He cited numbers of the 2014 UN E-Government Survey on the development of e-governments in some of the BSEC countries. He stressed that the survey provides data on three of the important features of e-government – provision of online services; access to telecommunications; and on human resources development. The data for the above 3 indicators shows that among the total of 193 countries Russia ranks 27th,  Greece 34th, Georgia – 56th, Armenia – 61th, Romania 64th, Moldova 66th, Azerbaijan 68th, Serbia 69th, Turkey 71st, Bulgaria 73rd.

Pavel Hristov noted that the introduction of e-government is a long and expensive process. The e-government aims at making the governing more transparent for every citizen and for the society as a whole, making the provision of public services more efficient. The participants in the meeting approved the report and appointed Pavel Hristov as the main rapporteur on the topic of e-government before the General Assembly of PABSEC.

They decided the next meeting of the Economic, Trade, Technological and Ecological Affairs Commission to take place on 17 -18 March 2016 in Yerevan, Armenia. The topic to be discussed at the future meeting will be: “Economic aspects of the problem with the growing number of refugees in the BSEC countries”. A report on this matter will be presented by Katarina Rakich from Serbia.

At the meeting in Varna the Georgian MP Mihail Matshavariani was elected as deputy chairman of the PABSEC Legal and Political Affairs Commission. He has presented a report themed: “The role of parliaments in securing the legal framework in the fight against corruption”.  He underscored that the presence of political will is essential for overcoming corruption. Participants from Turkey, Ukraine and Russia have taken part in the discussions.

It was determined that the next meeting of the PABSEC Legal and Political Affairs Commission is to be held in Athens, Greece on May 25-26, 2016. At the meeting will be discussed the legal aspects of the growing wave of refugees. Report on the topic will be drawn by the MP from Romania, Vlad Nistor.