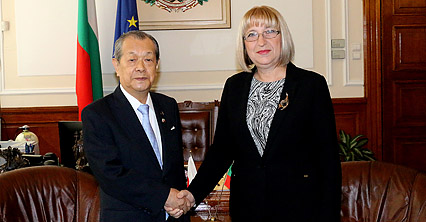 National Assembly President Tsetska Tsacheva and the Chairpeson of the Japan-Bulgaria Friendship Group of the Upper House of the Japanese National Diet, Koichi Kishi, discussed the strengthening of the economic contacts between Bulgaria and Japan and expanding of the Japanese investments in Bulgaria.

“There is a very good ground and serious potential to boost the contacts in the field of economy. The good relations we have will help for the deepening of the partnership between the small and medium size enterprises,” Tsacheva noted. The Bulgarian – Japanese business Seminar on Small and Medium Size Enterprises, opened yesterday by Mr “ Koichi Kishi, is considered to be a step forward in this direction.

The Chairperson of the National Assembly underscored that Bulgaria provides many attractive and profitable conditions for the foreign business and expressed hope this will attract more Japanese investors. She added that the lawmakers of Bulgaria have created the necessary legislative basis to ease foreign investment.

She reassured her guest that Bulgaria had always been in favor of the establishment of a strategic partnership between the EU and Japan.

Both leaders expressed hope that the signing of the Agreement for Strategic Cooperation between the European Union and Japan as soon as possible will boost the trade between Bulgaria and Japan.

The Chairpeson of the Japan-Bulgaria Friendship Group of the Upper House of the Japanese National Diet, Koichi Kishi declared that he personally would make more efforts to develop the contacts between the businesses of the two countries. In his words the SMEs in Japan amount to 3,850,000, which represent 99 % of all businesses in Japan. He further said this is very promising for the future partnership with Bulgarian companies.

The cooperation in the fields of culture and education was praised as equally important. Tsetska Tsacheva said there are many examples of good cultural relations. The interest for learning Japanese language is big and it is taught in many cities in Bulgaria.  Mr Kishi added he would work for broadening the contacts and the exchange in the field of secondary and higher education.

According to Mrs Tsetska Tsacheva the better knowledge of the traditions and cultures of the two countries will stimulate the development of tourism and said Bulgaria is hoping to attract more Japanese tourists interested in knowing the culture and history of our country.

She noticed that the friendly relations between Bulgaria and Japan have long history and traditions and stressed Japan is partner of prime importance to Bulgaria in all areas of cooperation. The two leaders praised the existing high level political dialogue.

The Speaker of Bulgaria’s parliament congratulated Mr Koichi Kishi on The Order of the Madara Horseman – first level - award , bestowed to him by the President of Bulgaria. Tsetska Tsacheva pointed out that the order represents high recognition of his active work in the development of the friendly relations between Bulgaria and Japan.