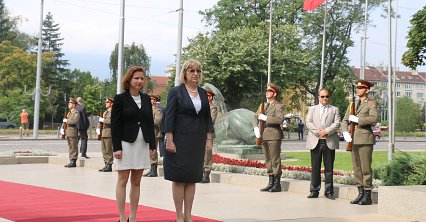 We highly appreciate the intensification of contacts between Bulgaria and Switzerland in the recent months, the President of the National Assembly said at the meeting. Tsetska Tsacheva and Christa Markwalder were unanimous that bilateral relations had largely intensified not only at parliamentary, but also at governmental level in various sectoral policies. They expressed assurance that the visit would be the next step in this direction. Moreover, your official visit to our country coincides with the 100th anniversary of the beginning of diplomatic relations between the two countries, noted the President of the Bulgarian Parliament.

Tsetska Tsacheva thanked Switzerland for the provided financial resources, which proved their contribution through the exchange of experience and good practices. Christa Markwalder pointed out that the Swiss state had various projects in Bulgaria which were successfully implemented. She expressed her belief that the projects under the Bulgarian-Swiss programme will develop further.
The main topic of the discussion was the opportunities for increasing the exchange of goods and attracting new Swiss investments in Bulgaria. We should work for promoting contacts between businesses and for increasing the exchange of goods, Tsetska Tsacheva stated. She added that the parliaments could create the necessary legislative framework to facilitate direct ties between the representatives of the business of the two countries.

Our country has very good conditions for attracting foreign investors, we have political stability, dialogue, working institutions and very good financial conditions. During the talks, the work of the Bulgarian-Swiss Chamber of Commerce was highly appreciated, whose main goal is to foster business contacts between the two countries.
Tsetska Tsacheva thanked for the decision to open the Swiss labour market for Bulgarians from 1 July 2016.
The President of the National Assembly noted that the Parliament would focus its work on taking legislative steps in the field of judiciary reform, being a starting point for achieving better results in combating corruption and organized crime.
Bulgaria has consistently supported the common European policy on migration and addressing the causes for the refugee wave, Tsetska Tsacheva said at the meeting. She added that as an external border of the EU, Bulgaria recognised its responsibility related to the security of European citizens. In this sense, accession of Bulgaria and Romania to Schengen will make the Union border more secure, the President of the National Assembly noted.

The official visit began with laying a wreath at the Monument of the Unknown Soldier.

On 6 July 2016 Christa Markwalder will be welcomed in the plenary hall of the Bulgarian Parliament.

At 11.30 a.m. Christa Markwalder will attend the presentation of the book by Prof. Venelin Tsachevski “Bulgaria and Switzerland together in history”, to be held at the Deputies Club. Guests of the presentation will be also deputies from the Friendship Group Bulgaria – Switzerland.