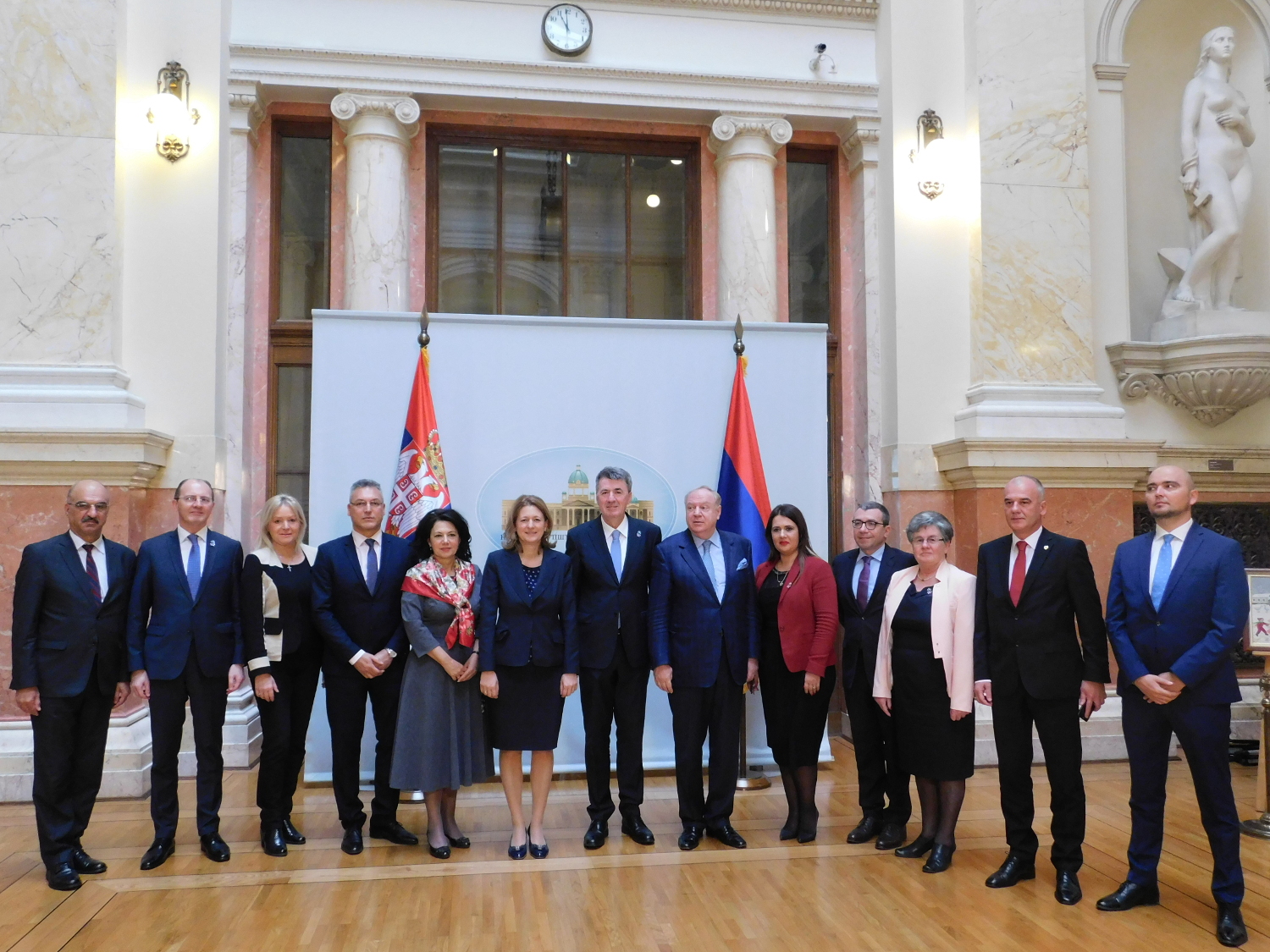 A parliamentary delegation led by Chair of the Foreign Policy Committee Dzhema Grozdanova participated in a tripartite meeting of the Foreign Policy Committees of Bulgaria, Romania and Serbia, at the invitation of Žarko Obradović, Chair of the Serbian Foreign Policy Committee.
Members of the Bulgarian delegation are Valery Zhablyanov, Deputy Speaker of Parliament and member of the Foreign Policy Committee, and Peter Petrov, Deputy Chair of the Committee on European Affairs and Oversight of the European Funds.
The initiative for tripartite parliamentary cooperation of the Foreign Policy Committees of the three parliaments was launched in October 2015 in Sofia. Today’s meeting is a continuation of the established practical cooperation and an opportunity for sharing Bulgarian and Romanian parliamentary experience in the pre-accession process towards EU membership.
One of the highlights of the plenary debate between the delegations were the constructive relations between the three countries regionally and internationally. The MPs expressed their confidence in the role of the three countries as a reliable stability and security factor in SE Europe and mentioned the unprecedented migration pressure on Europe. They expressed their satisfaction with the implementation of cross-border programmes as a main tool to achieve regional economic goals, part of the European project. The achievement of energy and transport connectivity remains a common priority, said the MPs.
The Bulgarian MPs affirmed their preparedness to assist in strengthening and deepening support to speed up Serbia’s EU integration process. The accession of Western Balkan countries to the EU is one of the main priorities of the Bulgarian Presidency of the EU Council as well as the Romanian Presidency in 2019. It is important to have actual time-frames for the integration of each Western Balkan country, they said.
Chair of the Foreign Policy Committee Dzhema Grozdanova expressed her satisfaction with Serbia’s active role in the regional cooperation. “Strengthening regional cooperation is closely related to the development and maintenance of good neighbourly relations. One of our main commitments is to contribute to a stable, prosperous and peaceful SE Europe and to the security of Europe”, she said. Dzhema Grozdanova added that it was of paramount importance that the relations between Serbia and Kosovo were brought back to normal. In this respect, Bulgaria welcomes the efforts for internal dialogue with Kosovo and expects a positive development, which was further encouraged by the meetings between the Presidents of Serbia and Kosovo with Federica Mogherini, EU High Representative for Foreign Affairs and Security Policy, held in August this year in Brussels, and the agreement on preparing a new phase of the dialogue for normalisation on the presidential level.
Dzhema Grozdanova invited a Serbian Foreign Policy Committee delegation to participate as an observer in the work of the Inter-Parliamentary Conference for the Common Foreign and Security Policy and the Common Security and Defence Policy, which will be held on 16-17 February 2018 in Sofia, as part of the calendar of the parliamentary dimension of the Bulgarian Presidency of the EU Council.
The Bulgarian and Romanian delegations had talks with Ivica Dačić, Deputy Prime Minister and Minister of Foreign Affairs of Serbia. He thanked for the support in the integration process of the country and asserted his readiness to tackle all bilateral issues in active dialogue between Bulgaria and Serbia. Dzhema Grozdanova expressed her satisfaction with the actions taken by Serbia to guarantee the rights of minorities and emphasised that those actions were especially needed in education and the access to Bulgarian media.
The next tripartite meeting of MPs from the Bulgarian, Romanian and Serbian Foreign Policy Committees will be held in 2018 in Bucharest.