National Assembly
of the Republic of Bulgaria
News
Dragomir Stoynev: We are living in extremely dynamic times and politicians must give faith and hope to the European citizens 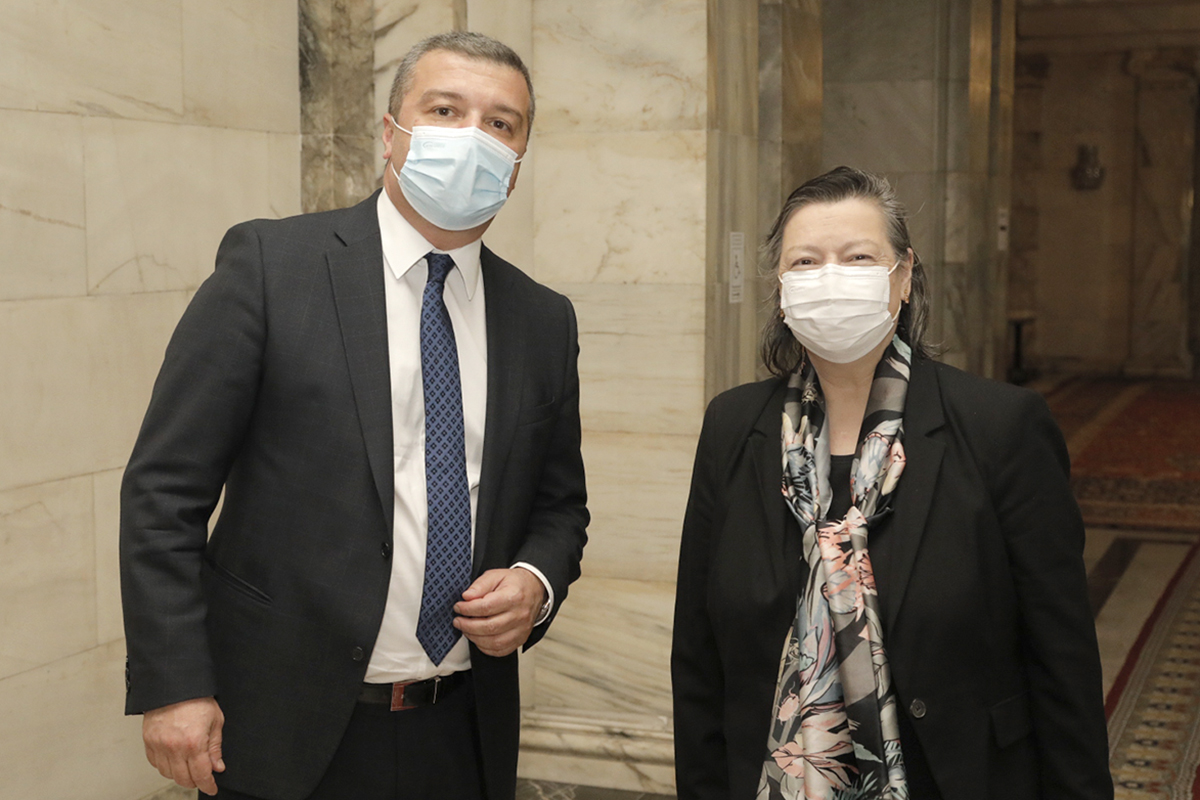 We are living in extremely dynamic times and politicians must give faith and hope to the citizens of the EU. This was stated by the Chairperson of the Committee on European Affairs and Oversight of the European Funds Dragomir Stoynev during the presentation of the priorities of the Portuguese Presidency of the Council of the EU. They were presented by the Ambassador of Portugal to Bulgaria, H.E. Mrs. Ana Mariya Ribeyro da Silva and are subject to the motto “Time for action: for a fair, ecological and digital recovery”.
H.E. Mrs. Ana Mariya Ribeyro da Silva placed emphasis on the logo of the Presidency depicting both the Sun and a rudder — a symbol of each of the Member States of the European Union, as well as the will for a new beginning and prosperity. In her words, at a time of unprecedented challenges as well as socio-economic consequences due to the COVID-19 crisis, decisive action by the European Union is required, such as increasing the trust of the Community citizens, solidarity, cohesion, etc. The Portuguese Presidency of the Council of the EU sets itself objectives related to the economic growth, the creation of new jobs and the stimulation of industry. Work will be intensive in order to make Europe a leader in terms of climate change and efficient management of energy resources. Last but not least is the adaptation of the workforce to the digital transformation, as well as strengthening citizens' confidence in European values and in an inclusive social system where no one is left behind, H.E. Mrs. Ana Mariya Ribeyro da Silva added and pointed out that the strategic autonomy of Europe, the implementation of the Multiannual Financial Framework, relations with Great Britain, the United States of America, Africa, Latin America and India at a high diplomatic level are part of the goals of the Portuguese Presidency.
The Vice-President of CEAOEF, Ivelina Vasileva expressed her satisfaction with the fact that maritime policies have a place in the Portuguese Presidency. She added that when discussing the “Green Deal”, it is necessary to take into account the positions of all Member States for the transition to be carried out in a fair manner.
The Chairperson of CEAOEF Dragomir Stoynev pointed out that Bulgaria supports the commitments and the efforts of the Portuguese Presidency regarding the economic and social recovery of Europe after the COVID-19 pandemic. According to him, now it is the time to act and take specific steps to emerge from the crisis in recent months.
Dragomir Stoynev, responding to comments of the ambassador, expressed hope for the involvement of the National Assembly in the process of adoption and preparation of the National Plan for Recovery after the COVID-19 Pandemic, namely its consideration and voting by the Parliament.